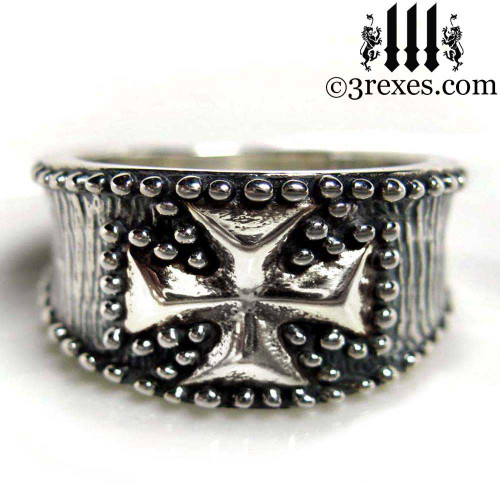 Silver Iron Cross ring loaded with a countless number of crude Medieval studs, can be worn by both pirates & wenches!

ABOUT THE IRON MALTESE CROSS: Often associated with The Crusades (11th - 13th century A.D.), this heraldic cross "pattée" (a cross that has arms which are narrow at the center and broader at the ends - French) was not only used by the Crusaders, but by the Teutonic Knights, Knights Templar and later it became associated with the German empire, Freemasons and modern Masonic organizations.

Ring Disclosure, Please Read:
1. Sterling silver is softer than 14kt & 18kt gold
2. Make 100% sure on your ring size for a wide band
3. Antiquing will vary. No two are alike!